By now most readers will know that Congress passed the Family First Prevention Services Act (FFPSA) as part of the continuing resolution to fund the government until March 23. The passage of this major legislation as part of a continuing resolution marks the final victory of an ideological agenda that has taken over the child welfare advocacy community.

FFPSA was drafted in secret without feedback from stakeholders such as state and county child welfare administrators, many of whom expressed opposition to the bill or at least concern about its consequences.  After several failed attempts to pass the bill over a two-year period, it was finally passed as part of a continuing resolution that was urgently needed to fund the entire government and avert a shutdown.

As a result of this linkage, fewer children are eligible for Title IV-E assistance every year, and states spend millions of dollars on the useless exercise of verifying eligibility for every child entering the system, as described by Sean Hughes in the Chronicle of Social Change. Yet, the advocacy community, in its single-minded quest to reduce the foster care rolls, gave up the fight to de-link foster care from AFDC.

Instead, the goal of “finance reform” became expanding the use of Title IV-E funds to included what the Act calls “prevention services.” These are not services to prevent abuse and neglect, but rather to prevent a child’s entry into foster care once that abuse or neglect has already occurred. FFPSA allows the use of these funds to fund parenting education, drug treatment and mental health services for parents.

Most of these “prevention” services logically belong to other systems, such as drug treatment and mental health, and are also funded by Medicaid. But prevailing ideology favors diverting foster care funds to other purposes, ostensibly to encourage prevention. In the most recent display of this ideology, the President and CEO of Casey Family Programs testified last week that “for every $7 the Federal government spends on foster care, only $1 is spent on prevention.”

No footnote was provided, but it appears that Bell was restating a common refrain that compares Title IV-E foster care expenditures with spending under Title IV-B, that is used mostly for in-home services. This comparison fails to take into account all the services provided by other programs, such as Temporary Assistance for Needy Families, Social Services Block Grant, the Child Abuse Prevention and Treatment Act, Medicaid, the Maternal Infant and Early Childhood Home Visiting Program and the Comprehensive Addiction and Recovery Act. Most of these programs are insufficiently funded, but it makes sense to increase their funding rather than divert funds that were designed to help good Samaritans meet the needs of the children they have volunteered to care for temporarily.

This view that a foster home is always better than a congregate (non-family) placement is another part of the prevailing ideology in child welfare. Congregate placements also happen to be more expensive, making restrictions on congregate care a perfect offset to FFPSA’s increased costs. It’s very convenient when ideological correctness coincides with saving money! Unfortunately, restrictions on congregate care may be harmful to children when there is a foster home shortage and so many of today’s foster homes are inadequate, as I described in my last column.

The lack of robust conversation and debate in the child welfare advocacy community has resulted in a “reform” that will create more problems than it solves. Our most vulnerable children deserved a better outcome. 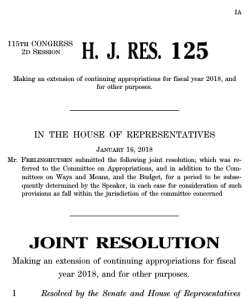 Some bad ideas just won’t go away. The Family First Prevention Services Act (FFPSA) is rearing its ugly head yet again. The act, which failed to pass the Senate in 2016, has been incorporated into the continuing appropriations bill passed by the House of Representatives on February 6.

Chapter I of the Act, billed as “Investing in Prevention and Family Services,” would allow Title IV-E funds to be used to fund services meant to keep children out of foster care, including mental health and substance abuse treatment, parent training and counseling, and kinship navigator programs.

The general idea of allowing Title IV-E funds to be used for services to prevent foster care placement makes sense. (I prefer to call these family preservation services rather than “preventive services” because true preventive services would seek to prevent maltreatment before it occurred, rather than preventing removal from the home after maltreatment has already occurred.)  But the bill limits the list of services funded to mental health, substance abuse treatment, and parent education and training. It does not include services like domestic violence prevention, peer mentoring or support groups, crisis intervention, housing assistance, and many others that could be crucial to keeping families together.

Chapter II of FFPSA is billed as “Ensuring the Necessity of a Placement that is Not in a Foster Family Home.” This chapter would forbid federal reimbursement for a placement other than a foster family home (often called “congregate care”) beyond two weeks without an “age-appropriate, evidence-based, validated functional assessment” using a tool approved by the Secretary of Health and Human Services to determine that the child’s needs cannot be met “with family members or through placement in a foster family home.” Such placements must also be approved by a court within 60 days. The bill also establishes stringent requirements that must be met by agencies seeking to qualify for reimbursement, including on-site nurses, for example.

This approach is problematic for two reasons.

First, we don’t have enough foster homes. States around the country are reporting foster home shortages. Reports of children being housed in offices and hotels have come from California, Texas, Oregon, Kansas, and Georgia, Tennessee, and Washington DC. With group homes closed, this problem will only worsen.

The attempt to close congregate care facilities without providing an alternative is eerily reminiscent of the closure of institutions for the mentally ill in the 1960s. These hospitals were supposed to be replaced with community health services that were never funded. We are still reaping the consequences with the abundance of mentally ill people sleeping on the streets of America’s cities.

Nevertheless, the authors of the Family First Act made sure to specify that: “A shortage or lack of foster family homes shall not be an acceptable reason for determining that the needs of the child cannot be met in  a foster family home.” One wonders where these children should go but perhaps the sponsors don’t care. It is the states and counties that will find a place for the children, even if the federal government does not pay a share.

Second, we don’t have enough good-quality foster homes. Anyone who works with foster children and parents knows that a minority of foster parents do a spectacular job, treating their charges like their own children. But many of the other homes barely improve upon the abusive or neglectful homes the children were removed from.

I’m talking about foster parents that never visit the child’s school or transport them to activities, insist that the social worker to take them to the doctor and therapist, refuse to meet the child’s birth family, and siphon off part of the foster care payment for their own purposes. These children need extra love, support, and enrichment, not the bare bones of room and board and nothing else.

The widespread simplistic belief that a foster family home is always better than a non-family setting has been promoted widely with heavy support from ideologically driven funders and advocates including the Annie E. Casey Foundation and Casey Family Programs. These groups employ slogans like Every Kid Needs a Family, ignoring the fact that most children entering foster care do have a family that they want to return to, and would not necessarily prefer being placed in a family of strangers rather than an educational or group setting where they can receive the enrichment they need while awaiting reunification.

Research supports the idea that quality is more important than the type of setting, and that high-quality group care can have even better outcomes than high-quality foster home care. Moreover large sibling groups can often be kept together only by placement in a non-family setting.

It is hard to understand that anyone believe that a loveless, bare-bones foster home is better than an idyllic environment like the Crossnore School in North Carolina, where foster children  (including sibling groups) benefit from dedicated cottage parents, an onsite school, and multiple forms of mental health treatment, including equine-assisted therapy. But the bare-bones foster home has one advantage over Crossnore. It is much cheaper.

Clearly, legislators want the savings from eliminating non-family options to offset the increased costs imposed by the expansion of Title IV-E to include preventive services. The Congressional Budget Office estimated that the restriction on non-family placements would offset almost 70% of the costs of extending IV-E reimbursement to family preservation services, over a ten-year period.

It is not surprising that government officials in the three states with the largest foster care populations–California, New York, and Texas, have all expressed concern about or opposition to the Family First Act. Other states have expressed their opposition as well .

Aside from a pair of hearings that were orchestrated by the bill’s sponsors to support their vision for the legislation, there have been no hearings or floor debate on the Family First Act. Last year, it passed the House by voice vote, and its Senate sponsors tried to get it through without a vote before going on summer recess. They failed, thanks to courageous Senators who cared about children enough to resist pressure from the powerful coalition supporting the bill.

Lets hope that the same wise and courageous Senators make sure this dangerous legislation is not allowed to slip into law in the urgent effort to pass a continuing resolution. Lets not save money on our most vulnerable kids. Spending money on better placements now will surely reap savings down the road in crime, unemployment, and welfare receipt.