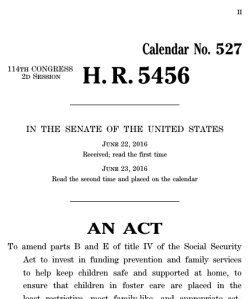 By now most readers will know that Congress passed the Family First Prevention Services Act (FFPSA) as part of the continuing resolution to fund the government until March 23. The passage of this major legislation as part of a continuing resolution marks the final victory of an ideological agenda that has taken over the child welfare advocacy community.

FFPSA was drafted in secret without feedback from stakeholders such as state and county child welfare administrators, many of whom expressed opposition to the bill or at least concern about its consequences.  After several failed attempts to pass the bill over a two-year period, it was finally passed as part of a continuing resolution that was urgently needed to fund the entire government and avert a shutdown.

As a result of this linkage, fewer children are eligible for Title IV-E assistance every year, and states spend millions of dollars on the useless exercise of verifying eligibility for every child entering the system, as described by Sean Hughes in the Chronicle of Social Change. Yet, the advocacy community, in its single-minded quest to reduce the foster care rolls, gave up the fight to de-link foster care from AFDC.

Instead, the goal of “finance reform” became expanding the use of Title IV-E funds to included what the Act calls “prevention services.” These are not services to prevent abuse and neglect, but rather to prevent a child’s entry into foster care once that abuse or neglect has already occurred. FFPSA allows the use of these funds to fund parenting education, drug treatment and mental health services for parents.

Most of these “prevention” services logically belong to other systems, such as drug treatment and mental health, and are also funded by Medicaid. But prevailing ideology favors diverting foster care funds to other purposes, ostensibly to encourage prevention. In the most recent display of this ideology, the President and CEO of Casey Family Programs testified last week that “for every $7 the Federal government spends on foster care, only $1 is spent on prevention.”

No footnote was provided, but it appears that Bell was restating a common refrain that compares Title IV-E foster care expenditures with spending under Title IV-B, that is used mostly for in-home services. This comparison fails to take into account all the services provided by other programs, such as Temporary Assistance for Needy Families, Social Services Block Grant, the Child Abuse Prevention and Treatment Act, Medicaid, the Maternal Infant and Early Childhood Home Visiting Program and the Comprehensive Addiction and Recovery Act. Most of these programs are insufficiently funded, but it makes sense to increase their funding rather than divert funds that were designed to help good Samaritans meet the needs of the children they have volunteered to care for temporarily.

This view that a foster home is always better than a congregate (non-family) placement is another part of the prevailing ideology in child welfare. Congregate placements also happen to be more expensive, making restrictions on congregate care a perfect offset to FFPSA’s increased costs. It’s very convenient when ideological correctness coincides with saving money! Unfortunately, restrictions on congregate care may be harmful to children when there is a foster home shortage and so many of today’s foster homes are inadequate, as I described in my last column.

The lack of robust conversation and debate in the child welfare advocacy community has resulted in a “reform” that will create more problems than it solves. Our most vulnerable children deserved a better outcome.

2 thoughts on “Family First: A “Reform” that Isn’t”